Up early again, and we headed off towards the school today. The road is becoming a familiar little hike (nearly a mile). On the way this time, I made sure to take pictures of both the “Please slow down, approaching school for the Deaf,” sign as well as the sign warning drivers that there are students crossing the road. Note how visible they are from 10 feet away down the road. 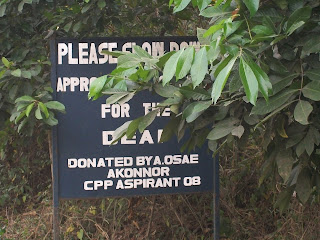 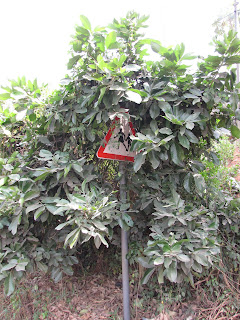 Yeah. Plus, it's not like the drivers are actually going to stop, or even slow down. The best we tend to get is the drivers honking to warn us they are speeding by us at deathly speeds. Still, for the kids at the school, that isn’t helpful because they can’t hear the honking, and this morning I saw two of the high schoolers nearly run down.
My Keens and I had been well acquainted before the trip to Ghana (I’d been walking and even running in them for weeks before the trip) but with the heat and the humidity, I’d managed to develop five or six blisters on my feet, and was really wishing I’d brought thin socks and my Chuck Taylors. However, I was glad for the instructions on wearing the same thing every day, because it meant not worrying about what to wear (because the children at the school have only ONE uniform and ONE set of play-clothes, so showing up in different clothes every day would not only be confusing to them, but would further impress on them the differences in our socioeconomic statuses). I only had one version of that sparkly blue skirt, but I had brought along a few different long-sleeved, dark blue Ts. The biggest concern was really how to get the itchy plastic hair off of my head.
This time, when we arrived at the school, I wasn’t expecting to be mobbed to the same degree, but the kids were just so, so very excited to see us. I got hugs and snuggles from a bunch of little boys, and Pablo was mobbed yet again as the kids tried to get him to tell them the crocodile-fish tattoo story. 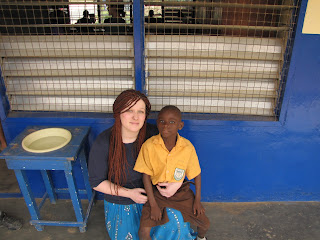 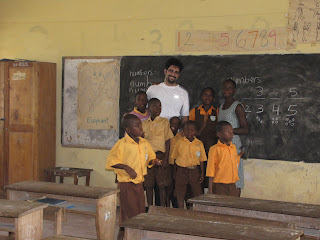 We got into the classroom and started to review colors, numbers and items at the school, but it was clear that many of the kids still were struggling with the very basic concepts (that signs meant something, that the English word and fingerspelled word were the same, and that all three represented a noun or verb). Frustrated, Pablo, Ellie and I flagged down Leah as she passed, and asked for her help. We continued showing signs for objects, but still weren’t making much progress. Eventually, Leah popped out and grabbed Rachel, and brought her to our room.
Now, I’ve watched every piece of Signing Time product ever made (including the ones where Rachel has hippie musician hair and wears blue) and I’ve worked with her on many concerts, both in person and over the phone, but I was completely blown away. She entered the room with an astounding amount of energy, assessed the class in just a few minutes, and started teaching. She’s an AMAZING teacher.
Once she realized the amount of disconnect between the kids’ current knowledge and cognitive ability, she came up with a very simple presentation, which I keep thinking of as “3-in-1.” She jumped up in front of the class, and starts. “Hi, my name is R-A-C-H-E-L,” she signs, fingerspelling her name. “My name is written like this,” and she wrote her name up on the board. “My name is signed like this,” and then signed her name-sign. “All three of these things,” she pointed to her written name, signed and spelled her name, “mean me.” She then had us label the whole room, and then we connected the signs with the written and fingerspelled words to the objects in the room. 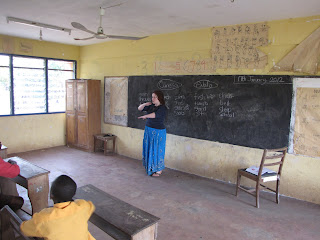 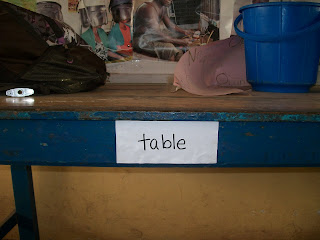 By this point, pretty much everyone had migrated into the special-ed room, so the student/”teacher” ratio was about 3 to one. We went around gluing papers with the words “fan” and “wall” and the like to every available surface, and then worked over each sign/word/bit-of-fingerspelling. The three videos below show her presentation, all of us working with the kids, and their excitement.

For some, this was their first “a-ha!” moment, where they were truly understanding what they were signing. For others, they were connecting the signs to the written words, and still others were connecting all three. It was one of the most powerful educational experiences I’ve ever had the privilege to witness, and it was made more impressive by the realization that our group had solidified into this beautiful team. Jen had learned all 20 signs we were teaching, and how to fingerspell each word; Ronai was balancing a bucket on her head while signing BUCKET and fingerspelling madly, Ellie was shepherding the boys with more severe special needs around the room, and Aaron was getting mobbed over by the ABC poster. Leah was working successfully with a group of boys, Curry was managing to both teach AND maneuver out of the camera’s path, I was working with some of the more experienced signers in the group, and Pablo switched between filming and teaching “fan” and “light.” It was remarkable and exhausting.

When the other teachers saw what we’d accomplished, we were asked to label their rooms and give the demonstration in there as well. We got started in one room, but then school ended for the day, so we had to leave, but we promised to come back the next day and do more.


We went back to the hotel, and then Rachel and I were off to Aburi to get measured for our dresses (one for each of us to match Joyce’s dress, and a second one for each of us). Rachel’s fabrics both had really intricate patterns in royal jewel tones, and she was trying to be very careful not to end up with starbursts on her bust. Looking at the hundreds of pictures of dress-types, all on beautiful curvy models, I couldn’t figure out what on earth to choose. As I was perusing, Aaron found one and said I should get it, and I took his suggestion. So, whenever I wear the dress, I’m going to remember taking Aaron’s clothing advice!
Then we headed off to the wood district to pick up trinkets and gifts. I picked up two ILY sculptures (one for our Deaf babysitter), some masks for my roommates and Pablo’s parents, a carved box for our other babysitter, a crocodile keychain for Melissa and a really cool purse. We then ordered a nativity plaque, and an ILY plaque for us, tiny masks on keychains for all of my classmates and a praying male angel for my mother. 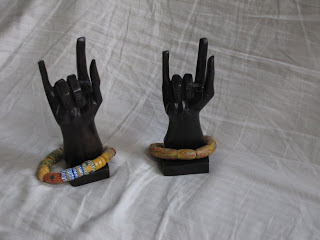 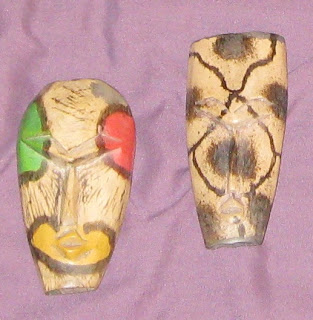 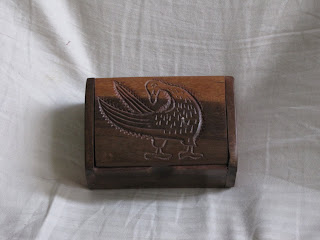 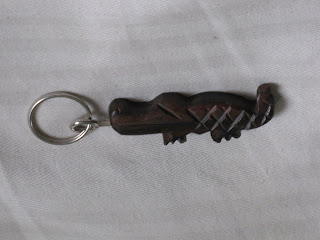 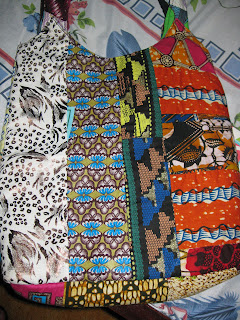 Just so you get an idea, everyone we saw in the wood district was busy turning this: 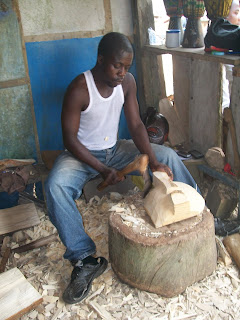 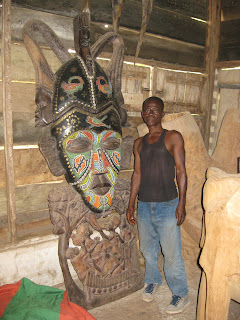 Shopping completed, we headed back past the big Wesleyan Methodist church and got some coconuts. 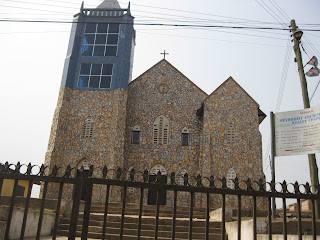 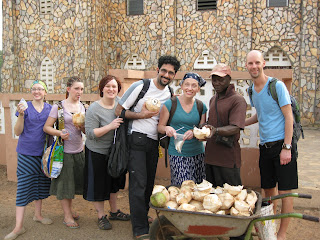 The man was hacking away at them with a machete, and all I could think of (besides “please don’t hurt yourself!”) was the stories I’d heard from my grandfather about his brother Bill’s time in the Pacific Theater of WW2. The descriptions of the women with 100 lb bags on their heads and the men cutting coconuts into their palms with machetes came racing back to me so fast it felt like I’d been hit by a wave. Slightly startled, I watched in awe as this man deftly chopped our food into edible portions with this ginormous blade, just struck to be seeing something in person I’d heard about as a child. We split into two groups and headed back to the hotel, and Pablo got overcharged for the taxi. When we arrived, the hotel’s power was out, so Pablo and I did some reading (he for his Environmental Sociology class, me for ASL Linguistics and Interpreting Theory) and changed into clean clothes to await dinner.

We were expecting a special guest, Mr. S- A-, a former president of the Ghana National Association of the Deaf. This esteemed presenter did us the honor of coming to our hotel, eating with us, and then giving us a phenomenal lecture on the history of Ghanaian Deaf culture, education and GSL. 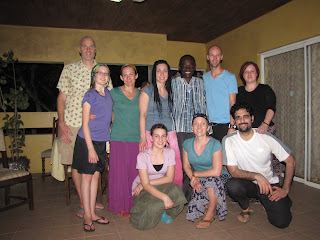 The video below is the talk he graciously allowed me to film, but if you aren’t fluent in ASL/GSL, you can read a short synopsis here.
The video is missing, temporarily (YOUTUBE!) but we'll find it.

The very busy and full day completed, we stumbled into our rooms and fell dead asleep.
Posted by PDX Loves Signing at 9:01 AM