The plane was huge. I mean, HUGE. I’ve never been on a plane that served real meals before, but our Nigeria Air dinner was nice, some sort of meat and sauce, and a yellow rice with mushrooms. I skipped the fungus. Then, I chatted a bit with Ronai, wrote up some of my ASL homework (not that I’ll be able to send it until I land in PDX) and watched the lights of New York disappear over the horizon. In the dark, thousands of feet above the ocean, I snuggled down under the blanket around 1am New York time, knowing we’d be woken for breakfast 90 minutes shy of landing.

Instead, I awoke to the start of a migraine, which I beat back with some Advil, and turned on the map-in-motion to see where we were. I could swear it said we were over Gambia, in Africa. Then I noticed the light trying to force its way in under the window shade. “No,” I thought, it can’t be.” Not a minute later, the cabin lights came on and the flight crew started waking people for breakfast. I snapped open the window shade and looked down onto a mountain range in AFRICA!

It was so red, and looked so dry! I ate the rice and corn filled hot-pocket-type breakfast, while staring out the window. We passed over the shore, and I realized I was looking down on the actual Ivory Coast, but as we descended we hit a wall of smog/smoke and humidity that blurred our vision. When it cleared we were only a few feet off the ground, over schools, tennis courts and homes, and I turned and kissed Pablo as we touched down in Accra. The plane erupted into applause for the pilot on a successful trans-Atlantic flight. 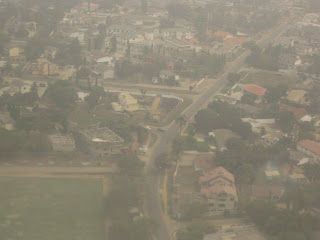 We exited the plane at about noon (local time) into a wall of heat, and I helped a nice grandmotherly lady in traditional Ghanaian dress get her oversized carry-on down the stairs, being careful to use my right hand. It was a long flight of stairs to the ground, and I wouldn’t have wanted my grandma carrying that heavy bag. I offered, hesitantly, and she told me “Thank you” in a very quiet voice. When we exited the stairs, she flashed me my first smile in Ghana, and she was off. 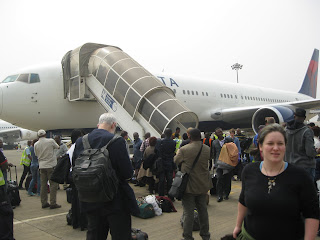 Once outside, I was overcome by how bright everything was. The very earth was an orangey-red, and the trees and ferns were huge, green and spreading. Some of the ferns were the size of Pablo’s first car, and we hadn’t even arrived at the airport yet!

Once inside, there was a multitude of unfamiliar ads, but the largest and most prominent restaurant promotion was an announcement that KFC had finally hit Ghana. Our group joked about how out of place the Colonel would look meandering through central Accra, and then we headed to baggage claim for that adventure. 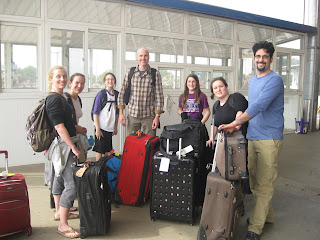 After escaping the airport, we loaded into our tro-tro (think 9-passenger van with jump-seats and no seatbelts). 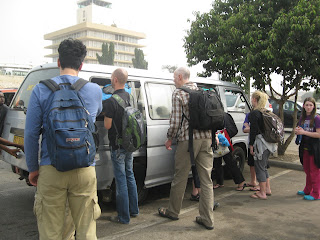 We loaded in, but discovered that our luggage didn’t ACTUALLY fit in the back, so our resourceful driving team pushed it in as far as it would go, closed the door as much as possible, and then tied the door to the bumper. 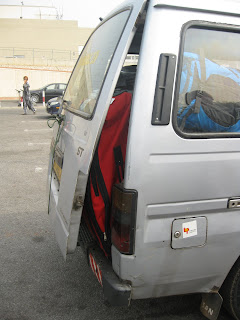 Then we were off. The girls and Rachel in the back; Ronai, Jen and I in the middle; Pablo, Curry and Aaron sat in the front passenger row. In front of them, in the drivers’…cabin?...was the D-, E- and another Ghanaian who I don’t believe I met again. We were off.

It took about an hour and 20 minutes to get from the Accra airport to Tutu, where our hotel was. We saw so much on the drive: Outdoor markets, people selling wares in the road, girls peddling bread from baskets on their heads and men on crutches begging in the streets. It reminded me a little of my trips as a youngster coming in from Tijuana, with all the people thronging around the cars. 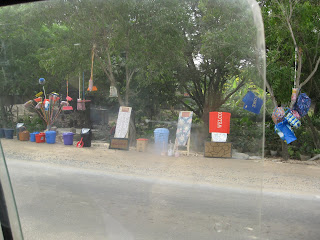 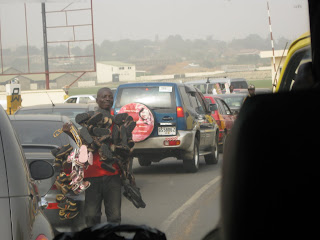 Culture shock set in on the drive, probably more so because we were so tired. We saw first-grade aged children butchering chickens, the oddest knickknack merchants (both in stores made from shipping containers and in groupings just along the road). We all just gawked for miles. 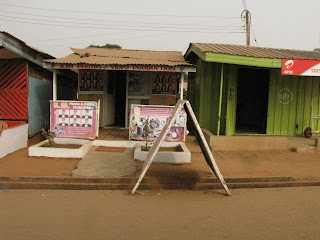 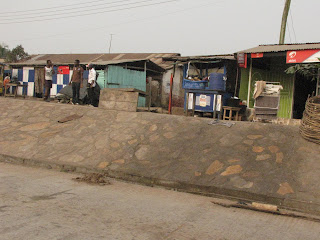 Heading up the hill, we saw government palace retreats, Bob Marley’s Studio 1 (recently damaged in a fire), and some amazingly large buildings next to small homes with corrugated tin roofs. 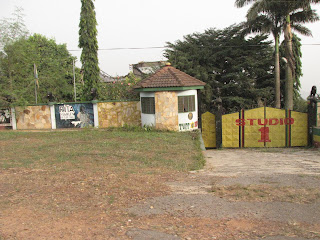 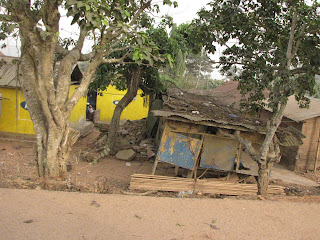 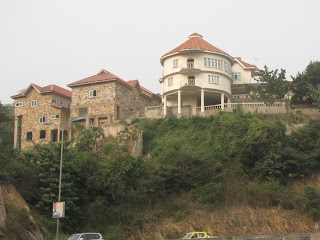 We stopped twice for bags of purified water (first for individual bags and then for a pallet of 36 bags to take on to our hotel). The 36 bags cost about $3. We dutifully bit the corners off of the bags and drank the water (making a huge mess as we did so) and then looked around for a trash can. We were told we were supposed to just wing the plastic bags out of the vehicle, but neither Pablo or I could, and I started seriously considering how to pack all our trash back home. 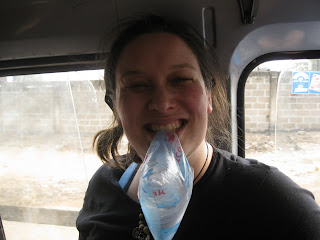 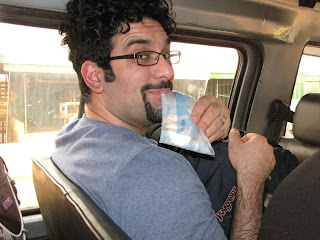 The tro-tro was loud, so conversations were either shouted or signed. I had a chat in ASL with Ellie and Leah about a Dr. Who episode (“Blink”…the one with the weeping angels), and about fun ways to freak people out who have seen that show. It all seemed perfectly normal to be signing along in a bouncing vehicle, racing down the road to who-knew where.

We arrived at the hotel (a massively gated complex that used to be a single family home). Our room is probably the size of Pabs’ and my first apartment. The toilet and shower for each room are in separate rooms and Pablo and I get to share an amazing balcony with Jen and Ronai. There are also a few sitting rooms, the veranda (which looks like something out of Rikki Tikki Tavi) and a very pretty yard, filled with exotic purple plants and large trees. 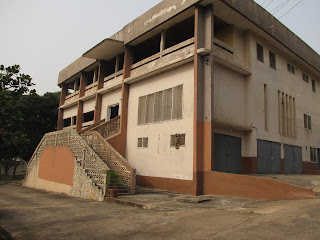 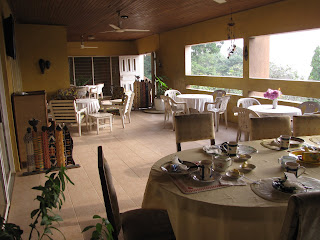 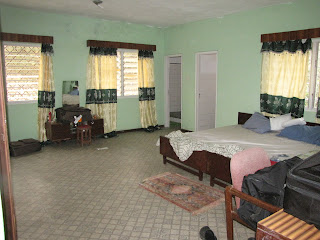 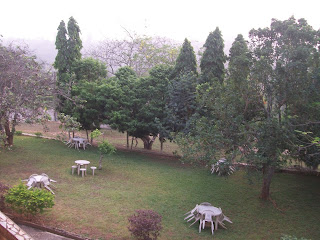 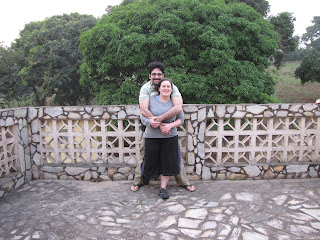 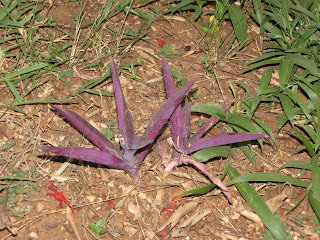 We unpacked and resorted, and fueled up on Probars. Then we headed out to walk to mile into central Mampong. There are no sidewalks, so we just traipsed down the shoulder of the highway, tow by tow, passing the Elementary and Junior Secondary School for the Deaf, as well as the Deaf High School. 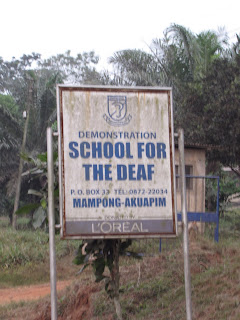 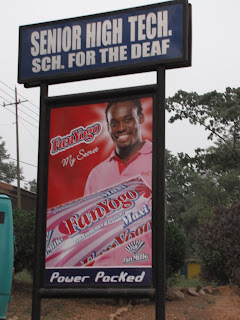 As we were walking, Curry gave us tips on how to spot the Deaf students by their uniforms, which meant that as we walked along to the strange looks of the general population, and the excited calling of the children (“Obruni!”, usually, which means “white person”), we were able to greet the Deaf high schoolers as we went by. Our first conversation was very “Hi, nice to meet you,” but the kids would tend to rush Curry and sign at him wildly. We were trying to keep up a good pace on the walk, but one little boy of about 10 waved me down. Our signed conversation is translated as follows:

Then he scampered off. The chat was brief, but was made awe-inspiring by two thngs. First, here I was, ten thousand miles from home, having a streetside chat with a child in my second language. Secondly, I can barely understand many of the hearing locals when they speak English, due to the thick accent (although their English is much better than my Twi), but I’m able to understand this little boy so much better.

Our quest to head downtown complete, we turned back and headed home the way we’d come. As we headed back, I noticed an older teenage boy staring at our group from across the road. When he realized I’d noticed him, he signed at me, asking if the man leading our little parade was Curry (using his name sign). I responded in the affirmative, so he gestured that I should get Curry’s attention for him. I called out to Curry, a good 30 feet ahead of me, that a boy wanted his attention, and Curry turned, engaged in a brief chat with the boy that lit up the youngster’s face, and then we were off again. As we walked, I pondered how simple and ordinary that exchange seemed for our fearless leader.

The quick exchange itself could have been an illustration in one of my school books on Deaf gaze and attention getting, acted out by Cinnie and company, and yet it was totally fluid here, without and stilted performance. I’ve attended Deaf events, and volunteered at WSD, but I’ve never seen the pieces of my ASL and Deaf Culture classes come together like I did during our little walk.

We arrived home to a fantastic dinner of chicken, rice and pineapple, and got to watch a few friendly geckos hanging out on the walls as they chased the huge insects. 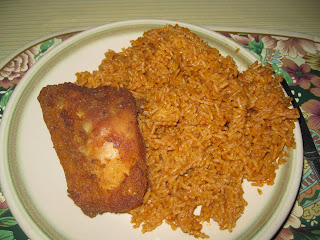 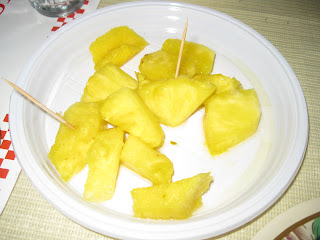 Then it was off to bed, where I popped in my earplugs and slept like the dead, or the Deaf, for 5 hours…before waking up to a headache induced by mothballs and insect repellant. Ah well, when else would I write?
Posted by PDX Loves Signing at 11:56 AM