We woke up this morning very exhausted and je-tlagged. There was a goat that seemed to be having its way with a chicken near the back of the hotel, and the roosters seem to be crowing every two or three hours all night. I'll need to work on positioning my earplugs so they don't fall out at night.

Breakfast was omelets again with the best toast in the world. The butter was even different from what we were used to at home. We gulped instant coffee mixed with Milo, and headed off to the school. 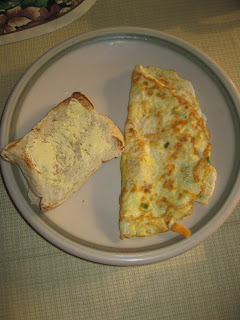 We scurried up the hill to be presented to the students and teachers on their first day of school. R- came out to greet us dressed in beautiful, formal Ghanaian outfit with an American flag scarf pinned around her neck. Curry told us that she was wearing it to show respect to us 9 visiting Americans. We were amazed and very touched. She gave us some warnings about appropriate behavior and cultural differences (for example, not to be upset to see the kids moving about their chores, as the school upkeep is partially their responsibility and they are learning life skills hat they'll need when they leave the school). She also cautioned us not to be shocked or upset when we saw corporal punishment used in the school, as that is something that occurs in Ghanaian culture and that they weren't "beating" the kids, but would use physical discipline in some cases to keep them in line [editor's note: after a week in the school, I can attest that what she said is true. Their discipline methods are far more "hands-on" than our generation is used to, but it is nothing different than our parents would have experienced in school, and the kids were not abused or injured. It is a large part of the culture shock, however]. Discussion cone, she dismissed us to the quad.

We lined up to the right of the students while R- welcomed them back for the Winter Term, reminded the students of the rules, and introduced the 9 "obrunis" to the kids, signing the whole time. I was thrilled and amazed that she was signing so well, and that there was no voice interpreter (except for Ronai and I furiously filling Jen in on the proceedings), as this is better than the situation I’ve seen in some of our schools for the Deaf at home.

She then called a boy forward who had been caught with a contraband phone. He was forced to hand over the phone and brought to the front of the gathering, and I was afraid he was going to be physically punished in front of us. We all steeled ourselves, only to have the boy simply chastised and shamed in front of all the visitors. ::whew:: Shame we can do!

Once the assembly was over, the junior secondary students headed over to their classrooms and we were herded over to the Primary Ed building, and assigned classrooms. Before we headed out, Rachel found herself immersed in conversation with H- a woman who she had met on the last trip, and had been dating M-, the Deaf Ghanaian who had gone on to college. H- had seen Rachel, and had told Curry “that woman looks like Rachel!” Curry, mischievous as ever, simply encouraged her to go ask the nice obruni what her name was. Their reunion was very, very touching. 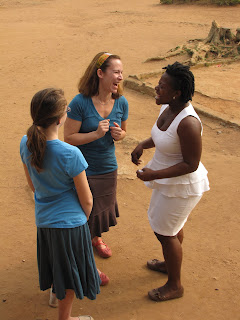 Ronai and Elly got a room full of first-graders, Rachel, Aaron and Leah got sent somewhere else, and Pabs, Jen and I got sent to the last room on the row.

hen we entered the room, I was thrilled to see it was full of older students, some in their early teens. I like working with older children much more than I do kindergarteners, so I was overjoyed. We worked with rush-brooms and then carted water in from the pumps to wash the floor and windows for the first day of class. Floor and windows clean, we then set up all the desks and cleaned them as well. 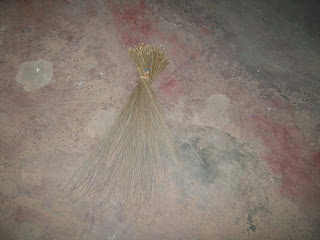 We were being very productive, but I was struggling to communicate with some of the students. I thought it was just my unfamiliarity with the language, and all the regional variations in their signing style (they ostensibly use ASL, but there’s some GSL in the mix as well). It wasn’t until the end of the day, when a random adult brought in a new kid that I found out we were in the older-kids-who-can’t sign/special education room. My heart broke, as I knew this would be a challenge for me on many levels, but after some consideration, I decided I could, and would stay in that room. 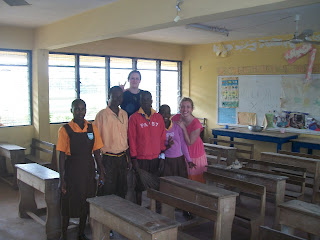 Work at the school completed, we headed off to town in a cab (for more on how one should always travel with Curry, check out Jen’s blog here) and started the hair process. Leah, Ellie and Jen got their hair done first, and it was a relatively quick and painless process (especially given what we were expecting from reading about Leah’s adventure last time. We watched Curry play with babies, chatted and goofed off, and eventually Jen left with the girls. 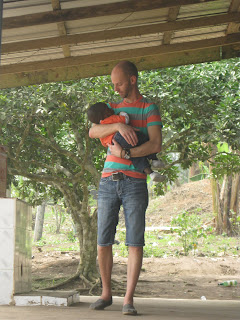 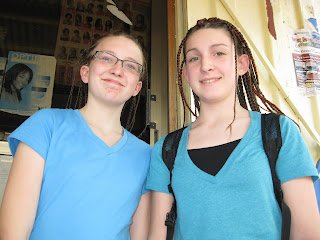 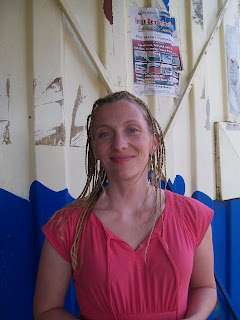 However, Ronai and I had “hair” added to ours, and it took 7 some odd hours for hers to get done, and 8 hours for mine. We were gone FOREVER. 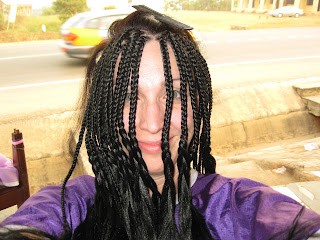 True, it looked amaz-za-zing when we were finished: 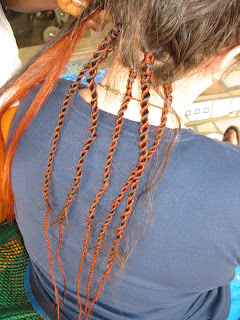 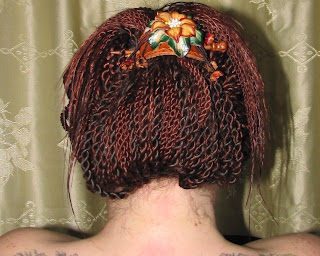 But by the time we got back, around 9pm, (after Ronai killed her SECOND taxi (although this one did smell like fish)), I was tired, cranky and wishing I had brought either music, earplugs or a book for the 12 hours I’d spent at the hair salon. Combined with the jet-lag and the sounds of Africa at night, I was pretty sure I wasn’t going to be able to get up in the morning.